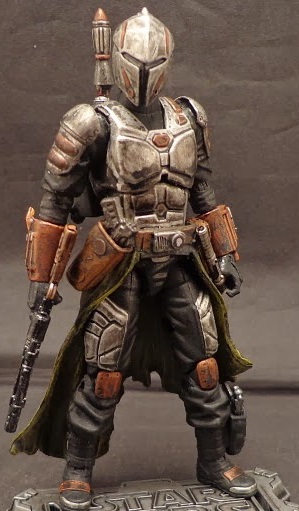 Some call him a coward, others a traitor. A just few respect his right to find his own path. Atin Kelborn was once a Mandalorian Alor`ad, or Captain to those familiar with Republic Army terms. The recent campaign across the stars was rife with opportunity for glory and honor for a Mandalorian worth his salt on the battlefield. In the beginning the war was like any other to Kelborn and he fought valiantly without question or doubt. But this war was on a grander scale than any could have ever dreamed and the troop level in the grand army of the Mandalore soon became difficult to maintain.
It wasn’t long before standards began to lax, conquered nations were given the choice of death or enlistment, and the most savage warriors of the dominated systems began to swell the ranks of the warrior clans in what would be called the Neocrusader movement. Atin began to notice a divergence from the traditional ways as the movement as a whole began to slide towards merciless destruction. Gone were the ways of honor and greatness, into the age of savagery, shameless pride and waste. Women and children became acceptable targets to incite fear, resources were wasted so the next objective could be reached quicker, weapons like glass bombs started to be put into use.
Atin Kelborn could not fight in this war. He could not understand what his people were becoming, and foolishly spoke out against it. Those who shared his rank but not his vision were for the most part all Neocrusaders. Few traditionalists remained, but even they would follow their Mandalore to the ends of the verse and beyond. It was the ways of old, their longing for convention, that made them follow their Mandalore so blindly even into this new and hopeless age. Atin loved his Mandalore but couldn’t accustom himself to these new ways.
Among those that rejected his Old World philosophy, Atin was shunned by his wife, an avid member of the Neocrusader movement. It was made clear to him that he needed to get with the times and fall in line or there would be consequences. Atin translated to the galactic tongue is stubborn, this was not a name given to him in jest. He continued to resist the rising tide of the Crusader movement and the battle on Cathar was his final straw. He planned to step aside from the galactic conquest, take some much earned time back home to be with his family and reconnect with his roots. His wife refused. He was ousted as a traitor and a coward and rejected by his clan. His own daughter, brainwashed to either hate him or think him dead.
So it has been in the resent past that Atin Kelborn finds himself disallowed and cast off into the galaxy. It is not difficult for a warrior or some skill to find work in the galaxy as a bounty hunter or mercenary; what is difficult to come by are friends. Loathed by the Mandalorians by at large and hated by the rest of the galaxy for their ignorance of his ways, Atin wanders in hope of one day being reunited with his family and clan. It is in this time that he does find an unconventional friend in the most unusual of circumstance. 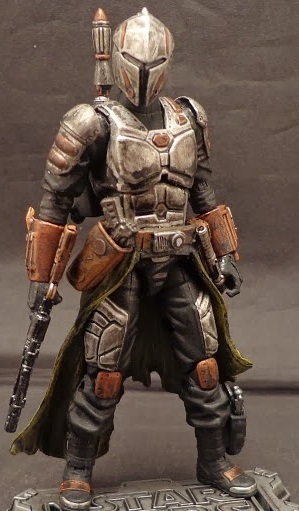