Corraun Jax started his training fairly late in life. At the age of 7 Corraun was discovered be Master Shi Leer when the older Jedi found himself on the mining planet of Sil.

Jax spent most of his youngling and early padawan years on a small space station above Neblos IX with Master Shi Leer and did not have the normal socialization most young aspiring Jedi have. This, along with being taken so late in life, caused Corraun to struggle when interacting in large groups. Likewise the headstrong youth had a tendency to struggle controlling his emotions.

These challenges aside, his strength and determination could not be questioned and after some time away from his Master the newly promoted Jedi Knight Jax has grown and matured significantly. These lessons have not come easy… and he bears deep scars from his experiences.

Reputation “Up and Coming Jedi” 11- 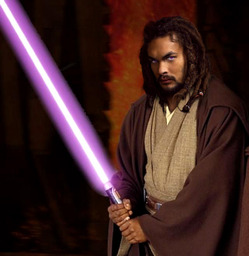