Alarms sound off when a Kandosii capital ship drops out of hyperspace. Only one, they must have split up their forces searching. The gravity well of the nearby planetoid prevents a ship that size from dropping out any closer to the Caelestis. With the Caelestis’ sub light drives only working, a quick calculation puts the Kandosii in heavy weapon range of the Caelestis in 21 minutes. Most recent engineering report puts hyperdrive repair at 30 minutes.
The heroes form a plan to buy the Caelestis time. They will attempt to take out the capital ship’s bow facing weapons; three ion cannons and one turbo laser. To do so they not only have to fly beneath the capital ships shields but they’ll also have to traverse a trench were the weapons are located. 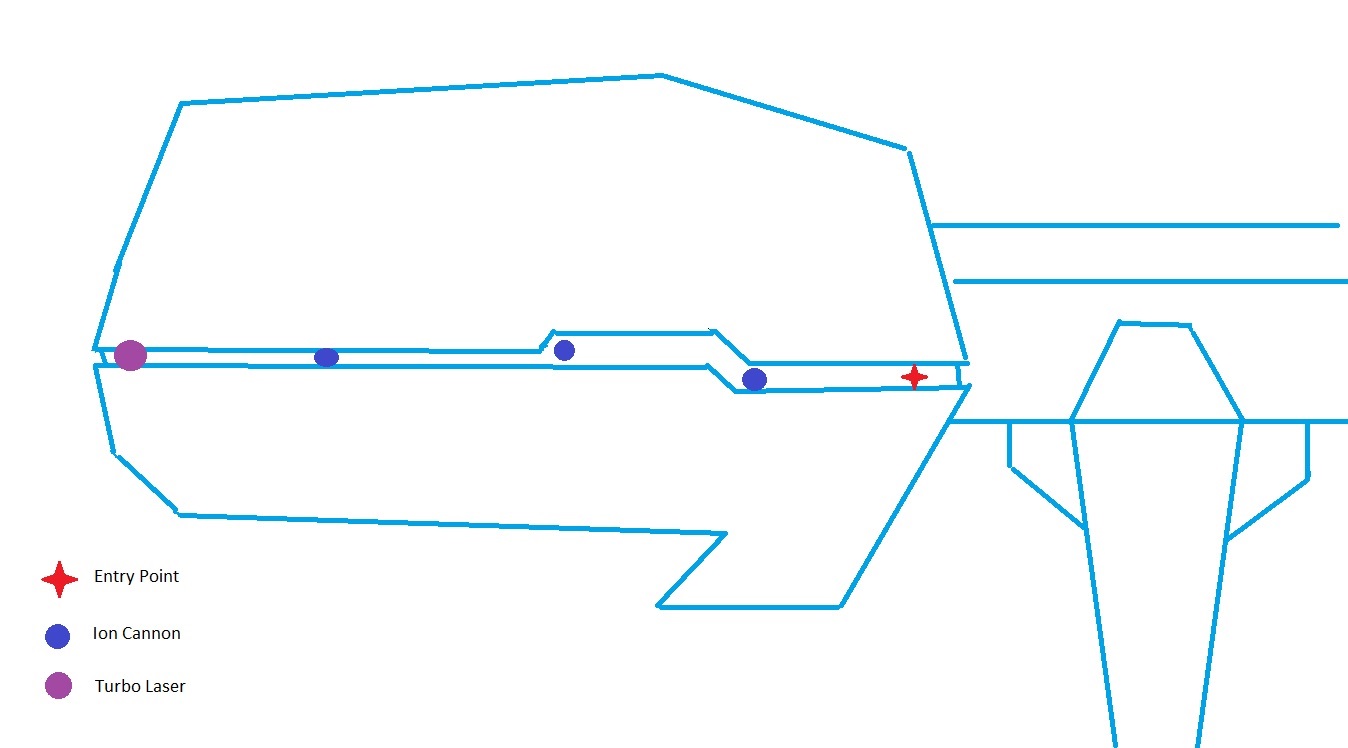 . Only one fighter a S-100 has proton torpedoes capable of destroying the weapon systems. The rest will be piloting Star sabers. Knight Jax will pilot they S100 and Leeloo in a Star Saber. Tala will pilot the Rogue Star with Kal and Kelborn on the turrets. Leeloo senses fear in the USF pilots and Corraun gives an inspiring speech that nothing is in possible and that many lives are in their hands.

The six fighters and Rogue Star are met half way by a squadron of Daavab fighters. During the battle Kal intercepts an encrypted mando transmission and begins deciphering it. After the Mando squadron is defeated he learns that a hyperspace beacon has been launched to alert the rest of the Mando forces. They decide to send USF pilots’ Rebo and Simms go after the beacon to destroy it while the rest of the group attacks the capital’s weapons.

They take heavy fire on approach to the capital ship. USF pilot Quang Tran breaks formation and rushes into the trench, fueled by his hatred of Mandos. Anti-Fighter auto cannons activate and blast him into the wall of the trench he dies in a fiery explosion. The rest of the group follows behind, but together. They work to take out the defense turrets while protecting Knight Jax while he acquires a target lock on the first ion cannon. After a successful lock the cannon is destroyed, but there is no time to celebrate as they continue through the trench taking out another ion cannon. The mandos deploy a squadron of fighters to defend the lunched beacon. Outnumbered more than three to one the USF pilots know its now a suicide mission, but are able to destroy the beacon before it’s message could be broadcasted.

Mando fighters swoop into the trench behind the group, Leeloo and Knight Jax sense their approach through the force. Jax’s instinct is to fall back and battle the Davaab pilots, but Leeloo reminds him that without his ship’s proton torpedoes the Caelestis is doomed. She hits hard on the breaks, loops back and briefly out of the trench then swooping in behind the Mandalorian pilots catching them by surprise. Dog fighting in such close quarters proves just as dangerous as any heavy lasers. In her element Leeloo destroys the pursuers.

With all three Ion cannons destroyed they prepare for the final assault on the Turbo-laser. Suddenly the trench narrows by half width. The Rogue Star in the lead is forced to fly on its side to squeeze in. The slightest error in piloting will put any of them into wall. Particular frightful for Kelborn and Kal in the quad cannon turrets only feet away from the walls. The rogue star soaks up the auto cannon attacks shielding the starfighters behind them while Kal and Kelborn blast away the defense turrets. Jax attempts to get a proton lock on the turbo-laser, but defense cannons are nested around it, blocking the target lock. The fighters must launch ahead of Jax and destroy these cannons. They do and Jax manages a lock, launching the last proton torpedo. With no time left he and Leeloo trust in the force and make the jump to hyperspace before the torpedo hits. The slower Rogue Star is caught in the explosion. The shock wave knocks them out of the trench, but Tala gains control of the ship and leaps to hyperspace.